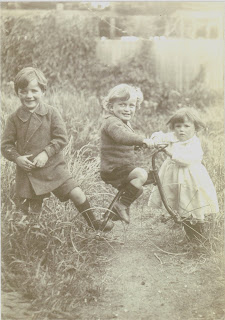 My mother attempts to get her turn on a tyre-less tricycle in a Christchurch backyard jungle, circa 1920. Her older brothers teased her relentlessly, but, as it is with brothers, they were her biggest protectors. 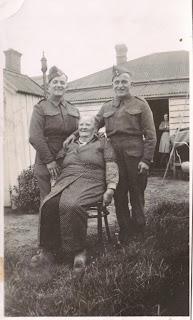 Who would have guessed that twenty years later those two older brothers would be in the army with a later departure for the North African campaign in World War Two. Pictured here in November 1940 with their maternal grandmother, a month after entering training camp. Happily, both returned all in one piece at the end of the war.

Although she might not appreciate the label "biker chick", mother could appreciate a bit of humour.

Like most Christchurch residents of that era, Mum was an ardent cyclist - not for the health benefits, but for getting from A to B in a low cost, relatively effortless way. She never did learn to drive a car; that all ended rather unhappily one day with the car on the front lawn inches from the front of the house, not in the driveway.

One of my first memories is of riding home from the doctor's, no doubt after a jab in the arm, in a child seat on the back of Mum's bike. No helmets, of course, but the wind in our hair, the thrill of familiar places passing by at a speed faster than walking, and the whirr of the chain & wheels in motion, just Mum and I.