A tuatara spotted on the upper stretch of the Turbine track at Karori Wildlife Sanctuary, Wellington. The sanctuary is "a mainland island" - an enclave surrounded by a predator-proof fence that is used to protect endangered native species as efforts are made to regenerate their numbers.

The tuatara pictured (apparently number 505 by the markings on his right side) is one of a number of tuatara introduced into the sanctuary in recent years from offshore islands where the only tuatara remained in the wild. Staff have found tuatara eggs within the sanctuary so there are increasing hopes that they will successfully reproduce in the sanctuary. 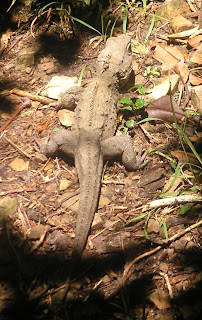 This blogger had long ago concluded he'd never see a tuatara in the "wild" so he was as stunned as the tuatara, even though this blogger knew they had been introduced to the sanctuary, when he turned a corner on the track to see the tuatara sunning itself on the track. 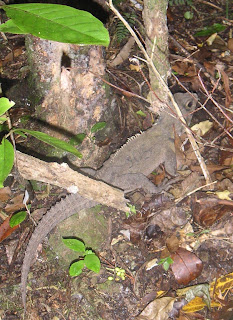 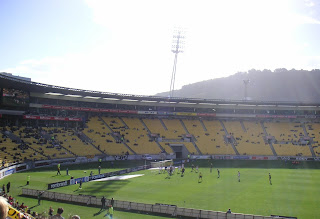 The A-League soccer team, the Phoenix, based in Wellington pulled off a 1-1 draw with Adelaide last Sunday to keep their chances alive in the A-League competition.

8000 showed up to the game played in the "Cake Tin", aka as Westpac stadium. Most of the crowd is behind the camera on the eastern (sunny) side of the stadium on a typical Wellington summer day - sunny, cloudy, & blustery. Pictured is a corner kick taken by the Phoenix.
Posted by kuaka at 1:14 PM No comments:

A view of the Sumner pier and beach from Cave Rock, probably in the early 1920s by Aldersley. Clifton Hill in the background, largely cleared of trees with some replanting on the lower slopes. Shag Rock (Rapanui) in far right background.

The building at the seaward end of the pier is the Sumner Lifeboat institution's boatshed that in more recent times has been relocated to a new building at the end of Scarborough beach that lies behind the camera position to the east. 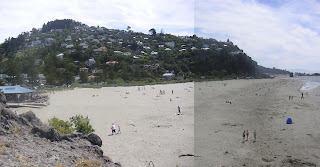 A modern view of Sumner from a similar spot on Cave Rock taken in early January 2007. (Two photos have been rather inexpertly spliced together). The pier has long gone but the pier tearooms - restaurant remains. The sand has accumulated over the decades so the high tide mark has moved further out from the old shoreline.

Clifton Hill has a denser subdivision of housing while tree replanting has expanded to add more cover and soil retention. Canterbury's nor'westers can act to dry vegetation on Clifton Hill and neighbouring hillsides increasing the risk of summer fires.
Posted by kuaka at 4:51 AM No comments: 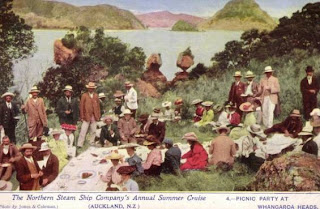 With the picnic season well underway in New Zealand, here's a view of early picnicking at Whangaroa Heads during the Northern Steam Ship Company's Annual Summer Cruise that was popular among Aucklanders in the early 1900s.
Posted by kuaka at 6:15 AM No comments: 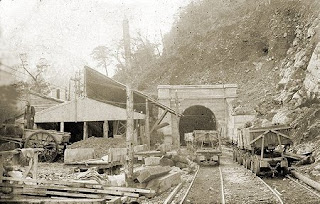 Construction yard at entrance to the Otira tunnel

The Midland line of the New Zealand railways network connects Christchurch on the east coast of the South Island to the West Coast. Confronting many geographic obstacles, the line must traverse the Southern Alps. At Arthur's Pass, a tunnel through the Southern Alps to Otira had to be constructed. 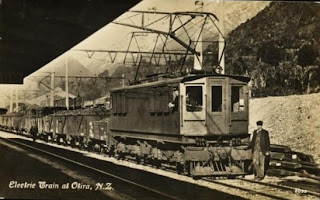 Electric locomotive at Otira
Rail service provided faster and more reliable transport for passengers and supplies to the West Coast, treacherous bars at the mouth of river harbours of Hokitika, Greymouth, and Westport putting shipping at great risk. The West Coast's major products, coal and timber, were more cheaply railed to Canterbury for domestic use and for export from the Port of Lyttelton.
Posted by kuaka at 6:11 AM No comments: 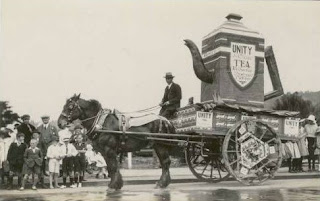 In an age when a cup of tea quenched the thirst of many New Zealanders, a parade float for Unity Tea travels through Whangarei, Northland, in an unidentified parade during the early 1900s.
Posted by kuaka at 5:10 AM No comments: 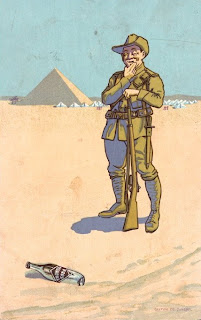 An advertising postcard for Thomson Soda, Caxton Company of Dunedin, New Zealand, showing a First World War New Zealand army soldier musing over his discovery of a Thomson Soda bottle in the Egyptian sands.
Posted by kuaka at 5:04 AM No comments:

Christchurch's first rowing club was established in 1861 at Kerrs Reach on the Avon River, becoming the Canterbury Rowing Club the following year. The first regatta was held on the Avon on Boxing Day (26 December) 1870. 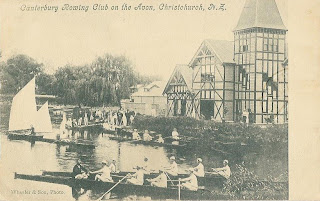 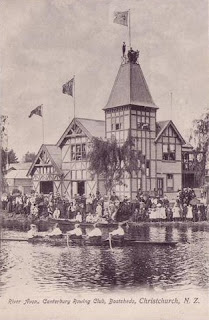 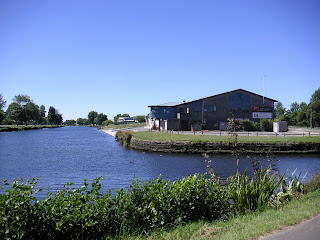 Today the Avon Rowing Club sheds & rooms occupy the Canterbury Club's former site and further down the right bank are the boatsheds of the Christchurch Canoe Club. 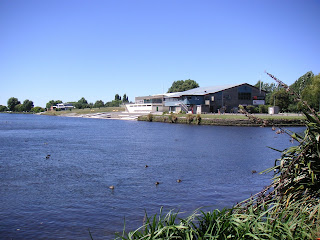 The Kerrs Reach cutting - a straightening of a stretch of the river - was completed in 1950 that allows improved rowing training and racing on the Avon. An old bend in the river runs away to the right of the present day pictures, essentially encircling Porritt Park which hosts a field hockey stadium. 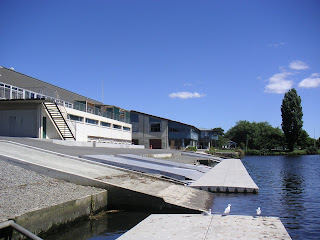 The Christchurch Bicycle Brass Band - Multi-tasking in the 1890s 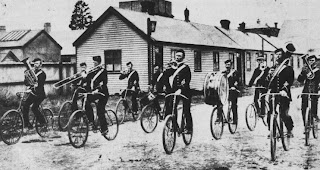 Not too much information on this picture, simply identified as the Christchurch Cycle Band, probably circa 1890s.

Who said multi-tasking is a modern phenomenon? Aside from steering, pedalling, & balancing simultaneously, these daring bandsmen had to recall their music and play one-handed.

Perhaps there was a first aid cycle team that followed them around.
Posted by kuaka at 4:49 AM 5 comments:

Anyone for Tennis? Opening of Wellington tennis season, 1915 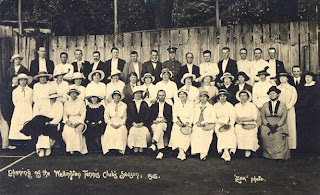 Opening of the Wellington Tennis Club's Season, 1915
The tennis season is in full swing in New Zealand.

Here is a club photo postcard of the Wellington Tennis Club's opening day in 1915. World War One is already well underway, a man in army uniform stands in the middle of the back row.

Photo by Zak, Joseph Zachariah, 1863-1965, a Wellington photographer who captured many images that fall within the category "social history" around the Windy City in the early decades of the twentieth century. His work is highly sought after by collectors.
Posted by kuaka at 4:45 PM No comments:

Another Day at the Cricket - Rangiora Oval

A splendid ground to watch cricket on a hot, calm day in Rangiora, Canterbury, New Zealand. A little bit more shade would be nice, but Canterbury Country Cricket Association is working on it.

The home side, the Canterbury Wizards lost by 4 wickets to Northern Districts. A result that I called correctly after I thought Canterbury posted too low a score and which displeased my eldest brother! Apologies for a sloppy cut & paste editing job, but all I could manage on-the-road...
Posted by kuaka at 8:08 AM No comments: