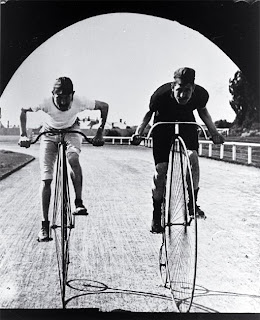 To encourage competitive cycling in New Zealand, national associations such as the New Zealand Wheelmen in collaboration with local clubs like the Pioneer Cycling Club sponsored international cyclists to compete in New Zealand.

In late 1887 and early 1888, Englishment Fred Wood and W Brown participated in a series of Champion Test Races around the country.

In Christchurch, the Test races consisted of one, five, and ten mile races with prizes totaling 100 pounds ($18,100 in 2009 prices). With race days on Boxing Day (26 Dec.) and 29 December, 1887, Wood and Brown raced against the competition from around New Zealand.

A crowd of 3,000 saw Wood outperform the competition in the Five and Ten Mile races, resulting in Wood placing first in the Champion Test Races with Wilmot of North Canterbury placing second.

Cycling was not without its dangers. As reported by the Otago Witness of 30 December 1887, in the Five Mile race, Hall of the Pioneer Club held first place some 300 yards from the post but when Wood challenged him for the lead at that stage, Hall missed his pedal causing him to fall from his cycle, dislocating his wrist. In a Half Mile race, Steadman and Bean collided which resulted in both incurring severe cuts about the face. 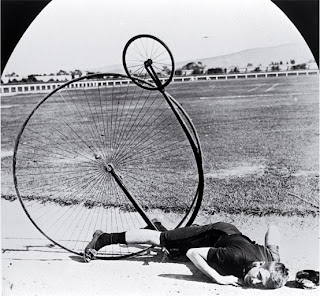 F Wood comes a cropper at Lancaster Park.
This appears to be a staged crash as the newspaper reports do not mention any crash or injury to Wood, although other riders were injured in the racing. Christchurch City Libraries
Posted by kuaka at 3:59 PM