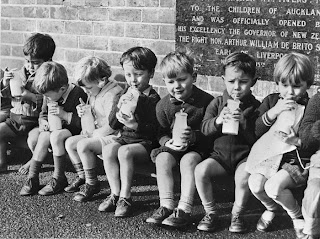 Auckland school children knocking back half a pint, 1937
New Zealand's First Labour Government introduced free milk for children at school in 1937 to improve the health and welfare of young Kiwis. In the midst of the Great Depression, it didn't hurt to find a steady demand for surplus milk either. For a time during the Second War War, school children even received an apple a day.
School milk meant better bone & teeth development, as well as a "meal" in the stomach at time when widespread economic deprivation caused by the Depression meant many kids did not get full nutrition at home.
Between 1937-67, school children received a half pint bottle of milk during their morning class sessions. In an era before widespread refrigeration, crates of milk boats were often stored in a small slatted shed raised off the ground in some shaded spot close to the school gates. At least that was the case at the primary school I attended in the last years of the programme. Boys in standard 6 would pile crates on a hand cart and deliver the milk to each classroom, later collecting crates of empties to be returned to the shed for later pick-up by the milkman.
School milk was not to everyone's taste, especially on warm, sunny days when unrefrigerated milk would warm and start to turn. The crown of cream on top of the bottle's contents could also be a bit off-putting as it clogged one's way into the liquid below.
In 1967, cost and some doubt about the health benefits of milk saw the end of the programme. In an age of "greater personal freedom", school milk gave way to expanded opportunities for private expenditures by ill-informed consumers in the guise of school children on soft drinks and junk food, the focus of "the concerned" shifting to childhood obesity and assorted ills. The more the wheel turns, etc, etc.
Posted by kuaka at 6:01 AM

Some of the girls I went to school with (in secondary school) used to bring 'milk' to school for school excursions.
Kahlua and milk, that is.
For some reason it never curdled in the sun...

We too received free milk in primary school. My father built an insulated shelter for the crates. But as you say, not nice on a hot day. To this day I don't like the cream off the top of milk.

Muriel Bell was a nutritionest. In the 1930's she convenced that the government should give school children and pre-schoolers free milk at school and thats how free milk came to be.

I loved the milk while I was at school in NZ and sometime we use to drink 2 or 3 bottles.
I wonder if the milk was polluted from the nuclear testing fall out in
Australia
One would wonder if the cows where eating the glass that had been effected by the radio active fall out
in both Australia and NZ