Kiwi Ingenuity - Getting There from Here...

Problem:
1. If your home stadium is off-limits for the whole season because of earthquakes so you have to play all your home games somewhere else; and,
2. A cloud of Chilean volcanic dust crosses the Pacific and closes air space to jet travel in your country,
How the heck do you get to your next away game as the competition heads to the finals? Throw in the towel, start a riot like those Canuck fans???
Answer:
Pull an airworthy DC 3 prop aircraft out of the air museum and load the team aboard. Takes a bit longer, a bit noisier but... link
Now, that is Kiwi ingenuity...
Go Crusaders!
Posted by kuaka at 9:02 AM 2 comments:

ANZAC - Australia New Zealand Army Corps, formed World War I.
ANZAC Day - In remembrance of all those who fell and all those who served... 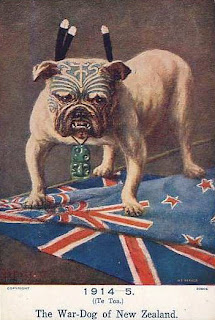 click on image for larger view
By the late 19th century, pakeha New Zealanders saw themselves as establishing a "Better Britain" in the South Pacific, people of British stock who saw themselves as building something better than back "Home" but who were but a generation or two at most away from "Home". It's no surprise then that in the patriotic war imagery above the English Bulldog, the symbol of the Britain, has become the War Dog of New Zealand standing astride the New Zealand ensign overlapping the Union Jack of Britain. Maori taonga have been appropriated in the form of the full face moko, tiki, and huia feathers of the Maori chief. 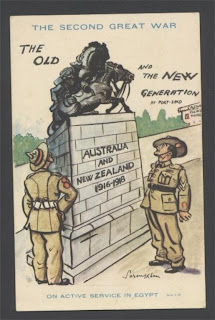 To my grandfather and his brothers who served in the "war to end all wars" - or so they were told, and to their sons and son-in-laws - to my father and uncles, who served in the next one: we have not forgotten. May we never have to send our sons and daughters to another one.
Posted by kuaka at 8:14 AM No comments:

A 5.1 magnitude aftershock jolted the already frayed nerves of Cantabrians on Wednesday. Reported as a sharp, vertical-movement quake it did some more damage to already unstable structures and infrastructure systems. The closure of the CBD has been extended, but water and power seem to be back to regular levels for all but a small number of residents. The "boil" order for water has been removed.

On a personal note, am pleased to report an aged aunt has relented and agreed to move elsewhere to be with family after it was found further mortar had dislodged from a precarious chimney following numerous after shocks.
Posted by kuaka at 8:43 AM 1 comment:

Multiplied up a thousand times plus a few more, the reports from the extended family of the damage done to property & more importantly people's nerves by the quake detail how the Christchurch quake is impacting a city & Canterbury. One family's house flooded by a rising Avon River & quake damage, an aged aunt's home threatened by an unstable chimney that threatens to come crashing down into the kitchen, another's home with cracked foundations and so the list goes on.

Curiously, I find myself relaying messages from one branch of the family to another across the city plain at 8,500 miles distance...

To a city now changed:

Into my heart an air that kills
From yon far country blows:
What are those blue remembered hills.
What spires, what hills are those?

That is the land of lost content,
I see it shining plain,
The happy highways where I went
And cannot come again.

- A E Housman, A Shropshire Lad

And a few much more uplifting lines from Coldplay's Don't Panic:

All in all that I know
There's nothin' here to run from
'Cos yeah, everybody here has
Got somebody to lean on
Posted by kuaka at 10:33 PM No comments:

And if you are sorely in need of diversion from worrying about loved ones, the damage to a beloved city, or how to put body and soul back together, then take a break, find a working tv and watch today's Australia v Springboks test. There's nothing at stake for Kiwis, watch it even if you can't stand rugby, because, well, it's just an exciting game of soaring success, reversal, digging yourself out of a hole, and playing down to the wire. For 80 minutes you'll at least be diverted, distracted, and maybe even enthused.

We now return to normal transmission - test pattern to be imagined  about here. (You have to be reasonably old to know what a test pattern was).

p.s. I've been scared to ask anyone, because it would seem crass, but what the heck, it's me after all, does anyone know if Lancaster Park, er AMI stadium held up ok? It should given all the new construction!
Posted by kuaka at 5:50 PM 2 comments:

Sandy in comments under the New Brighton post below gives us this link to preliminary assessments of the earthquake's damage to heritage buildings. Like her I'm saddened by the damage to some of the structures and the reversal of a lot of hard work by many people over the years to preserve these artifacts.

I'm particularly disheartened for the folks working on restoring the Time Ball Station in Lyttelton. They had made great strides in restoration and strengthening and were according to the article close to completing the work. I've had the opportunity to admire their work firsthand on a couple of occasions in recent years on what must be a tough project given the Time Ball station's location and architecture.

If living in New Zealand has taught me anything, however reluctantly I've wanted to learn it over the years, is the power of natural forces to make a mockery of our puny human attempts to create permanence and reshape the physical landscape. Whether standing in the front yard of the Time Ball Station surveying the harbour from mouth to its "foot" (far end from entrance) or poring over aerial photos or various types of maps of Banks Peninsula, I've found myself taking the long, long view: the human presence and our follies are but a blink in deep time. We get to pass this way fleetingly as those before us have and those to come will. But we all in common share in our own times that physical environment.

For all that, I hope what can be saved is saved to hold back the law of entropy at least for one more blink.
Posted by kuaka at 5:40 PM No comments:

Severe Weather Next Test for Christchurch?

Severe nor'westerly gales in the next few days followed by a southerly cold front with rain (the usual climatic mood change in Chch) may be the next test for Christchurch's residents.

The Met Service and emergency services think that the nor'westers may loosen masonry and topple unstable buildings that haven't been made safe by demolition. And, with many damaged buildings exposed to the elements, any rain brought by the southwesterly will likely just compound matters.

Plenty of aftershocks apparently, but not the one big one of a 6 or so that often hits in the first 48 hours after the major one. Seismologists think the big one may acutally have been three quakes close together, but I'm sure most Chch residents regards that as all academic right now.

Power must be on in enough places around Chch for me to be getting direct & indirect reports from family & friends that they are safe & well, most have suffered only minor damage to property but folks like Sandy's parents & neighbours in comments to a previous post below obviously have been hit hard.

"Our man in Burwood" - my big brother - reports a lot of liquefaction of the soil, a phenomenon produced by the quake, has caused a lot of subsidence in east Christchurch of the type Sandy reports in her comment. In addition to buildings being damaged, ruptured water pipes and sewers are the result.

Some on other sites are commenting that they thought the Big One would be in Wellington, not Christchurch. Wellington will have its Big One again - it had huge ones in the 19th Century, the Wairarapa quake being the worst. But no one should have been under any illusion Chch couldn't have one. The effects would simply be different because the city is essentially a drained swamp and Plains are alluvial flood plains. Growing up in Chch, we were always drilled on earthquake preparations & cover and left under no mis-impression it could help in good old Chch.

ANYWHERE in New Zealand is fair game (poor choice of term, perhaps) for earthquakes being on the Pacific Ring of Fire - that's quakes, volcanic activity, and tsunami. Did I miss anything out?

That said, I think if I was to go through a big quake I'd prefer to take my chances in Chch over Wellington, having lived in both cities. Wellington sits on top of several major faults, including the Main Divide fault that bi-sects New Zealand north to south. Dealing with recovery and clean-up on hillsides would likely be more difficult as well compared to the flats of Chch.

Moreover, access into & out of Wellington is limited to a few choke points that if blocked would hamper the ability to evacuate or get assistance into the city. The airport itself sits on reclaimed land uplifted by the Wairarapa quake in the 19th century. Years ago I read that the then Ministry of Works parked a bulldozer at the top of the Ngauranga gorge each night, ready to start work on clearing a passage in the event the gorge highway is blocked by rock slides caused by a quake. That's provided the driver could get there and her 'dozer hadn't been lost down the hillside...

But as my late mother, a proud life-long Christchurch resident, would say "don't borrow trouble". Then she'd put a kettle on for a cup of tea for the "poor beggars" who were "worse off than me" and then go grab her broom, mop, and bucket so she could pitch in. For all that, I'm glad Mum didn't go through it. All the best to those who have & now must clean up the mess.
Posted by kuaka at 10:25 AM No comments: