Sunday Work Down On The Farm - A Century Ago 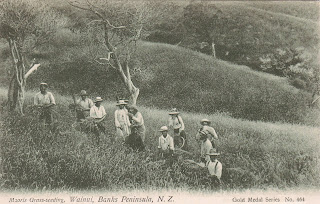 The Akaroa Mail editorial, as reprinted by the Ellesmere Guardian, 2 February 1898, p. 3:

"The climax of interfering legislation was (says the Akaroa Mail) reached on Sunday, when P. Glyan, who was busy with his cocksfoot, was stopped with a threat of immediate prosecution if he proceeded with the work.

It is well-known that an obsolete act of Charles II, that peculiarly virtuous monarch, has been adopted by our Legislature in part, so that at this end of the nineteenth century it is possible to render yourself liable to punishment by endeavouring to take the ox out of the pit.

For many years past we have been accustomed to hear the whirr of the reaping machines on the plains through the day and night of Sunday, saving the grain from the terrible nor'-westers, "and no man said them nay."

It is reserved for a constable in a remote locality to make what we think an unnecessary fuss.

After the experience of the terrible fires of last week, of the fierce nor'westers trying to drive every grain of cocksfoot from the heads, does it not make any reasonable person writhe to think that farmers should be prevented from snatching from destruction their chief means of maintenance?"
Posted by kuaka at 6:09 AM