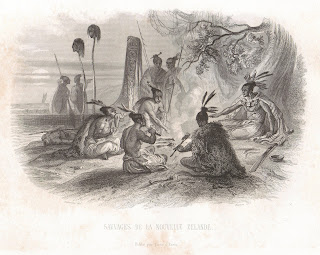 Emile Rouargue’s fanciful illustration of Maori cannibalism, an illustration in a volume on French explorer Dumont D’Urville’s expedition to . The artist is not known to have visited . This illustration is on the cover of Moon’s This Horrid Practice – the title itself being Captain James Cook’s reference to cannibalism.

In This Horrid Practice, (: Penguin NZ, 2008), author Paul Moon argues that Maori cannibalism or kai tangata [human food] was more widespread and occurred later than many histories record. Moreover, in various radio & newspaper interviews launching his book, he charges revisionist historians have sanitized histories in recent decades by ignoring or excluding discussion of cannibalism. This post will limit itself to the second claim and its factual accuracy.

Conceding for argument’s sake that political correctness in has been widespread in recent decades, the charge that recent general histories have denied or ignored the practice of cannibalism is a weak one not borne out by the facts.

A quick review of Sinclair’s history shows at least three separate references: quoting Maori anthropologist Terangi Hiroa (Sir Peter Buck) as dryly commenting of the pre-European Maori that ” ’Human flesh was eaten when procurable’.” (p.18); that the inter-Maori musket wars of the 1820s “led to heavy casualties and cannibal feasts unprecedented in pre-European battles fought with stone weapons” (p. 42); and, that under the influence of the missionaries “Christian chiefs… gave up killing and cannibalism” (p. 45). It is clear from the tenor of Sinclair’s remarks that cannibalism was embedded within Maori culture and was practised on a large scale in the 1820s. A closer reading of Sinclair’s body of work would likely uncover further references to the role of cannibalism within Maori culture.

Turning to Michael King’s Penguin History of New Zealand, he certainly does examine the short, brutal lives of Maori, cut short often by premeditated acts of violence: “As Maori oral tradition recorded, and ancient burials have confirmed, elderly people, women and children, along with defeated male warriors, were periodic subjects for torture, killing and cannibalism.” (p. 87) King continues with an un-cited quote detailing the evidence of violence at a burial site in that notes the site was hidden possibly to avoid desecration by enemies (pp. 87-89).

King also cites the Grass Cove incident of 1773 in which ten of Captain Cook’s crew were victims of Maori cannibalism to underscore the misunderstandings of first contacts between Maori and Europeans, despite Cook’s generally enlightened and moderate approach to indigenous peoples in the Pacific (p. 106).

One might be led to conclude, among other possibilities, that Moon’s consideration of these two general histories was limited to an act the first year student is cautioned against: the reading of a book’s index to a topic rather than a thoroughgoing reading of the work in question. A scholar has a higher duty yet - of familiarizing himself with the body of another’s work before making a full assessment.

Stepping back from King’s general history which of its nature means even for such a young country as that many matters must be dealt with sketchily, in the context of his body of scholarship it is clear that King knew well and did not shy away from tackling the vexed issue of cannibalism.

Nowhere is this more apparent than in King’s Moriori (1989) in which he presents an authoritative account of the genocide, including cannibalism, of intertribal colonisation by mainland Ngati Mutunga and Ngati Tama Maori of the Chatham Island/Rekohu Moriori. King’s work was path-breaking in confronting a European or Pakeha myth that Moriori were an inferior, non-Maori group driven from the mainland; in challenging Maori accounts of the Moriori genocide; and, affirming Moriori as first peoples in Rekohu.

In Moriori, (for example, pp. 62-66), King quotes at length missionary Johannes Engst who collected the few surviving Moriori accounts of genocidal cannibalism: after death, “the heads were removed and thrown to the dogs, which gnawed off the best and buried the remainder for the next meal. Then the virile membrane [penis], having been cut off, was thrown to the women sitting around who ate this dainty morsel eagerly…. The heart, the most sought-after part of the whole body, was set aside for the chief guest…. When it [the flesh] had all been washed clean it was brought to the oven…. [Once cooked] they then laid the flesh compactly in small baskets, giving each person an individual portion.” (p. 65).

Did Sinclair and King ignore or deny the prevalence of cannibalism? Even their general histories suggest not.

If you don’t like the meat, just eat the vegetables…