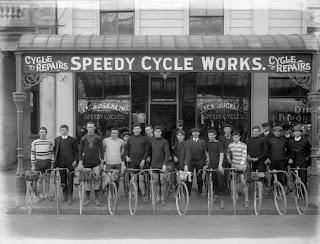 Jack Suckling's Speed Cycle Works located at 114 Manchester Street, Christchurch, circa 1912-14. Jack is the moustached man wearing a cap and watch chain at centre right just a fraction behind the row of cyclists. A number of the "scorchers" (cyclists) are in their racing gear, perhaps for a day's track racing at Lancaster Park or for road racing. Photo: Adam McLay. Alexander Turnbull Library. Click on image for larger view.

Jack Suckling was an integral part of the Christchurch "cycling craze" in the late nineteenth, early twentieth century. He ran a retail store at several different locations around the central city in the early 1900s, operating at the corner of Kilmore  and Barbadoes Streets in 1906 but by 1909 had relocated to 256 Oxford Terrace east. By the time the above photo was taken his business had moved to 114 Manchester Street, a street along with High Street, that had become popular among cycle businesses as a retail location.

Jack promoted his Speedy cycles to the young men known as "scorchers", the competitive racing cyclists who lived for either the track races at Lancaster Park and out in the small towns around Canterbury or for the road races across the province. Good money was to be made from winning racing prizes to pay back the price of a cycle, so Jack suggested in his advertising, and he'd make a few bob in the process.


So why don't you give Jack a call at Christchurch 2574? Don't be surprised if you get a busy signal.